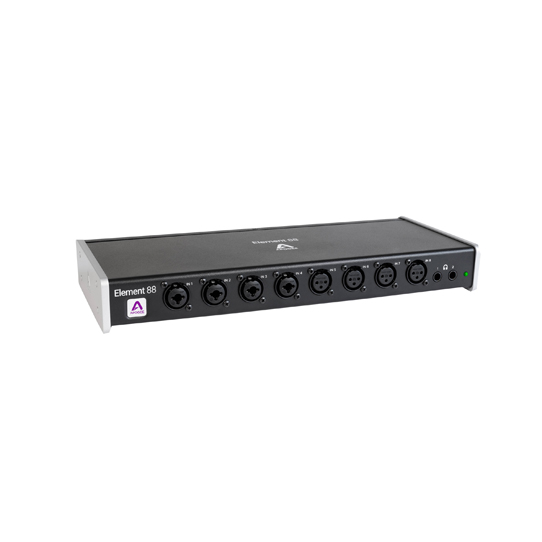 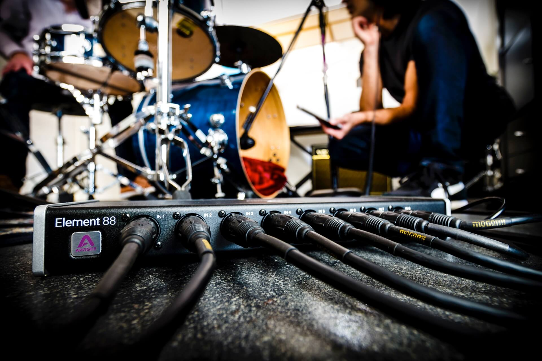 If you record music to a Mac, the Apogee Element 88 is for you. The Element 88 is a 16-in/16-out audio interface that takes the best of cutting-edge Apogee gear and packs it into a streamlined, cost-effective unit. The Element 88 gives you eight balanced front-panel analog inputs, two rear-panel XLR outputs plus two balanced 1/4" outputs, two stereo headphone outs, and word clock I/O. Eight of Apogee's world-class mic preamps are onboard, with selectable phantom power. For expansion flexibility, optical I/O is also provided with ADAT (8 x 8), SMUX (8 x 8), and S/PDIF (2 x 2) compatibility. Apogee's Element Control software gives you remote control of your hardware on your Mac and wireless control via iPhone, iPad, or iPod touch.

Microphone preamps that can do it all

Drums, vocals, guitar, strings, brass — each source places unique demands on your mic preamp. You need a preamp that can do it all, capturing the minute details of every performance. Apogee's Element series mic preamps are engineered with the company's Advanced Stepped Gain Architecture, an analog circuit that dynamically optimizes across a 0-75dB gain range to provide exceptional bandwidth with the lowest possible distortion.

Your audio interface's clock source is like a conductor, meting out tempo to the orchestra. A digital audio clock delivers a timing signal to all parts of a digital audio system, synchronizing every part of the AD/DA process. Every Apogee Element series interface is spec'd with its own onboard clock source that provides pro-studio-grade word clock I/O for syncing with other digital audio equipment. Slave your Element to other gear, or take advantage of Apogee's superior clocking technology, by using your interface as a master clock.

Apogee's Element Thunderbolt driver delivers impressive low-latency round-trip performance (1.41ms), along with rock-solid stability. This proprietary driver also draws less CPU power thanks to Apogee's Direct Memory Access (DMA) technology. At Sweetwater, we can confirm that the DMA implementation in the Element series lets you run more plug-ins and monitor through your DAW at low buffer settings. With Apogee Element interfaces, you no longer have to choose between speed and power!